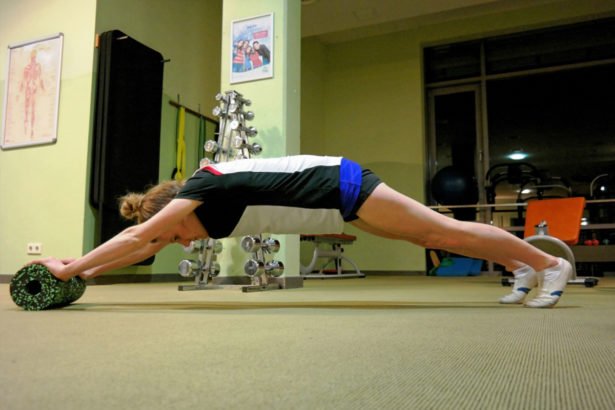 Saskia Güntner (23) is 'sportsperson of the year', a master student, works in marketing and besides all that, she is a performance sportsperson. What she does is 'Rhönradturnen': wheel gymnastics. Saskia and her wheel gymnastics team at TSG Bergedorf Leichtathletik / Rhönrad, who became sports team of the year 2015, do not only roll with the big wheel but also on BLACKROLL®. BLACKROLL® is used not only for the usual roll out sessions for speedy recovery and preparation; they're also experimented with making handstands and splits on the BLACKROLL® products ombining them in extreme balance training. Her BLACKROLL® training is anything but usual: see pictures below.

Careful though! Don't try this at home! Unless you know exactly what you're doing, like Saskia. Since 2012 Saskia is doing this amazing sport (one has to have loads of strength as well as flexibility) on a performance level and trains no less than 6 to 7 days, of which 3-4 times with the wheel. In 2014, she won her first national titles in North Germany and (in her own words) - as the underdog - took the third place twice in the German National Championships, qualifying herself for the World's Championships to her own surprise. She hasn't been in the wheel gymnastics top scene for that long yet, however she's going strong.  Through her trainer Jan Winter, also educated as a BLACKROLL® Trainer, she learned about the diverse BLACKROLL® products.

Since wheel gymnastics isn't an Olympic qualified sports and rather unknown, and athletes have to pay for a big part their own costs, BLACKROLL® offers a good recovery method as there is no physiotherapist at hand before and after training: "Experience shows that I can get quite far with just the BLACKROLL®; especially directly after training (and especially after 'leg day'!) I really enjoy to extensively roll out the tensions in my body to get ready again for the next training".  Wheel gymnastics demands a lot from the body: not only does one need mobility and flexibility. It also requires maximum full body tension, strength and precise movement at the same time. The movements Saskia makes in the wheel, quickly create tensions in her back and neck. The BLACKROLL® DUOBALL are great to use in her case, she claims: "besides the normal recovery session, I can treat myself to punctual treatment of tensions. Sometimes very painful - but it helps. Somehow I find the pain pleasant, especially because I notice improvement immediately". Saskia got acknowledged for her performance by winning 'Sportsperson of the Year 2015'.  Want to know what wheel gymnastics looks like? Watch Saskia Güntner in action!